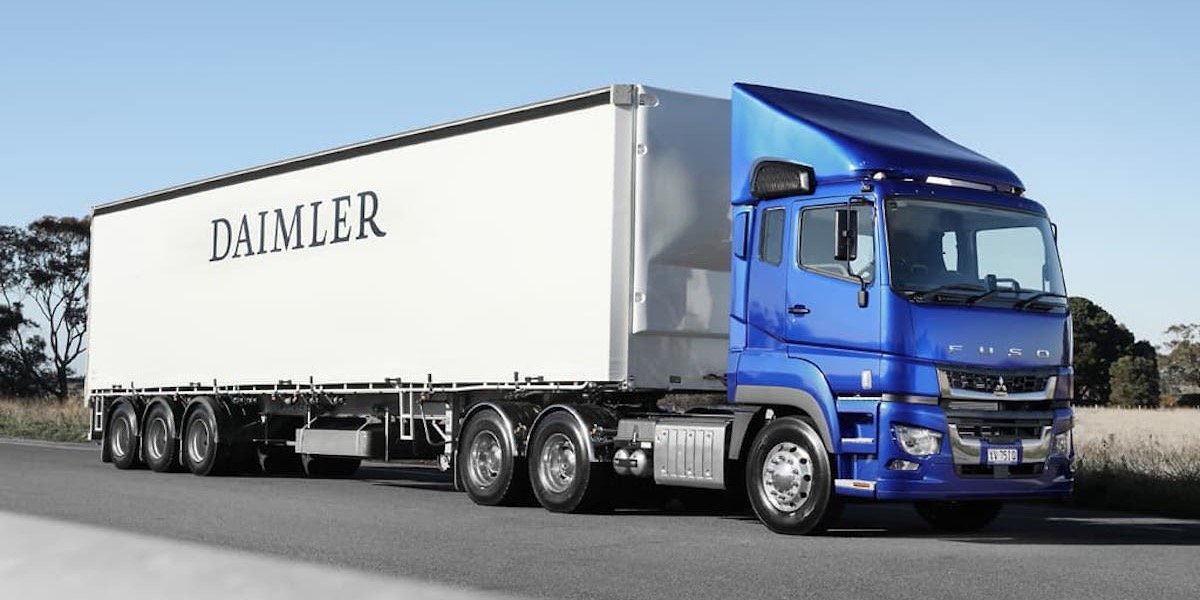 This market segment, which falls at the lighter end of the prime-mover spectrum has been a successful one for Fuso and, intent on maintaining their share, the company has thoroughly reworked the vehicle.

The Shogun now employs all Mercedes-Benz running gear. The 10.7 litre engine with 455hp, peaking at 1600rpm in this guise, has been plucked from the Actros and is a proven performer. The maximum torque of 2200nm peaks at 1100rpm and pretty much stays there through to peak power, before dropping off gradually. There is plenty of both right up to 1900 revs.

Keeping the engine in its best rev band is the excellent Mercedes Benz derived 12 speed auto ‘box. Positioned as a stalk on the lhs of the steering column, it is simply a ripper. Push in a button on the tip and you can have full auto in either eco or power mode, or manual. In auto, changing down a gear is a simple flick down – and vice-versa. Three stage engine retardation is achieved by clicking the stalk forward.

The truck now runs complete Mercedes-Benz electrical architecture, where the previous model had a bit of a blend. So we’re talking tried and proven running gear with matched electricals, such as the ECU. For guys who work on the Mercedes product it is an easy step across to the Fuso.

Shogun is a quantum leap above its predecessor with a full suite of safety features as standard – Active Emergency Braking, Lane Departure Warning, and Autonomous Cruise Control. There’s also Auto headlamps, Daytime LEDs, Rain sensing wipers, Stability Control and EBS brakes. Next to the trailer brake beside the driver’s seat is a lever which allows you to gradually apply the trailer brakes only, in much the same way as a caravan brake fitted to cars. It is another worthwhile piece of safety tech. Gone are the Bug-eye rear vision mirrors fitted to the test vehicle which I personally loved, but the standard replacements give good rearward vision. Fluid reservoirs are easy to reach and check without having to tilt the cab. Entry and egress is a breeze with grab handles in all the right places.

Also added since the testbed truck is Attention Assist which should be mandatory in – not only trucks – but every vehicle. It detects when your eyes stray off the road for a determined amount of time. And it works! I’m getting up to 100km for the first time and my eyes are on the speedo – apparently for too long. An audible warning and flashing yellow on the dash instantly brought my eyes back to the road ahead. (I didn’t do it again). If you stack this truck you have done it intentionally!

Inside you get all the driver comforts including full climate control, Sat-Nav and great speakers to listen to your favourite music and hear incoming calls. There are a myriad of nooks and cranny’s to put your odds and ends. Controls are logical and easy to reach and the dash gives you all the info you could possibly want.

Indicators are on the right (thankyou Fuso) with gear changing and exhaust brake on the left. Cruise control (adaptive), phone answer, volume control and other items are on the steering spokes. The dials and TFT screen between them are all clearly visible through the spokes. The air suspension can be adjusted via a wand beside the seat and be used from inside or outside the cab. The driver’s seat is firm but after a few hours behind the wheel, my backside was still happy as.

Shogun is rated at 63 tons and will pull a B-double, so you can slip on a second trailer if needed – say if one of your big bangers was out of commission. There’s also a ‘bed’ in the back for very skinny truckies, but I’d be requesting a motel. This is not designed to be an interstate truck but rather a Prime Mover that is easy around town and intrastate, and will handle the big stuff on the occasions it may be called upon to do so. It is a great gap-filler in the Daimler range, fitting nicely between the Mercs and Freightliners, and Fuso’s rigid range.

On the road, the Shogun is well insulated, allowing for conversation at normal levels. There’s no wind intrusion from the door surrounds. I’d prefer a touch more ‘weight’ on the steering, but I quickly got used to it and I’m guessing it’s just right for urban work.

On takeoff the gearbox selected a higher gear which gave leisurely acceleration (with our GVM of around 38 ton), but as mentioned, you can knock the gear down a slot or two for ‘traffic light races’. Early in my drive I was ‘told’ to get back in my lane by the departure warning. This can be turned off when needed – say when navigating the narrow lanes over the Westgate Bridge or in built up areas.

Last but certainly not least, the Shogun is a good looking beast. There is a trace of Mercedes Benz DNA in its design, particularly from head on – and that’s no bad thing given the Merc is a great looking piece of kit.

The Fuso Shogun is a huge advancement when compared to its predecessor – and that was a great truck. The changes ensure it will keep its place in its market segment. Like its medieval namesake, it will serve you well. Get down to your Fuso dealer, hop in and take it for a spin. You won’t be disappointed.