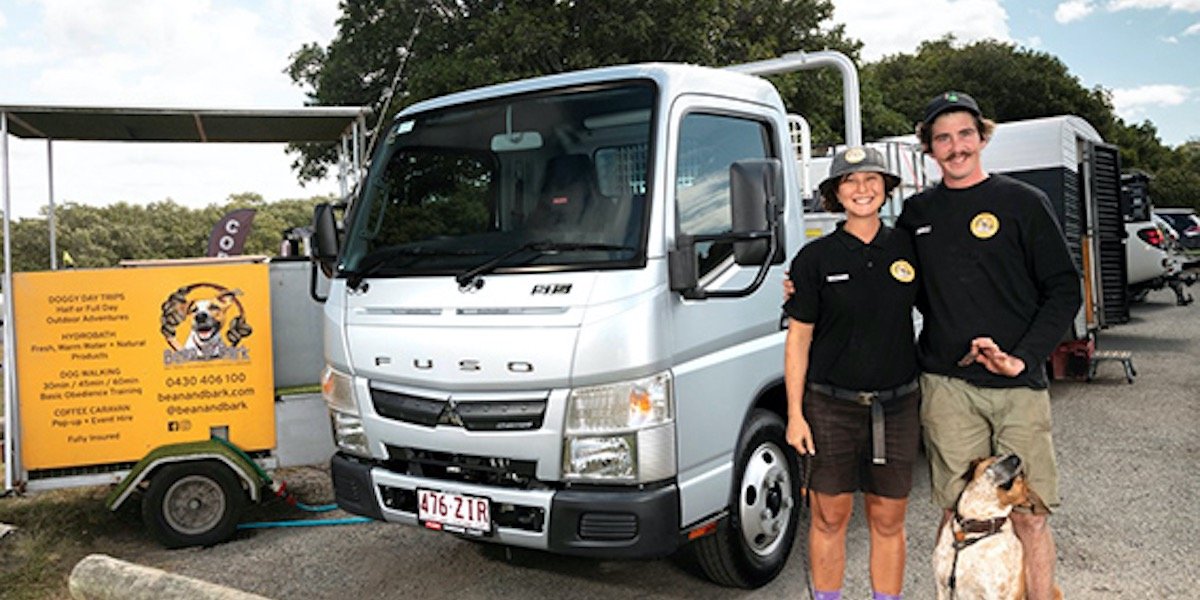 The innovative business is the work of Danule Taylor and his partner Brianna Young, who have built it up over the last 18 months. The pair, who both have considerable experience as chefs, customised a 1970s caravan-based food van into striking custom coffee van complete with tiles, chequer-plate and wood surfaces.

Danule bought a Mitsubishi Triton ute to haul the caravan as well as an IBC water cube on the tray for dog washing. "It was really too much for it," Danule said. "It was struggling and a few things started to break." Danule considered a larger American ute, before deciding to purchase a Fuso Canter 515.

So, how does the Canter handle the load?

"It doesn’t even notice it is carrying anything," says Danule. The 515 City Cab Canter is fitted with a Duonic dual-clutch Automated Manual Transmission as standard, which means it is easy to drive around town. It has independent front suspension, which gives the Canter a more car-like ride.

"It is really easy to drive," says Danule.

The Canter has a class-leading payload and Danule’s Built Ready model comes with an aluminium tray as standard, with plenty of room for the water tank and all the dog wash gear.

The idea of Bean and Bark is that that customers can grab a coffee and or something to eat, which they can enjoy while waiting for their dogs to be washed.

Danule explains that the concept is a win for dog owners and for dogs. "It means that people can bring their dogs along and let them really enjoy the beach, run amok and get absolutely filthy; then get washed before heading home," he says.

Danule says the inspiration for the Bean and Bark business came from a dog named Egg who he and Brianna adopted. "We wanted her to have a better life and now she gets to play at the beach for four days a week, which is pretty nice," he said.

Like all Canters, Danule’s model is covered by a manufacturer’s warranty for five years or 200,000km kilometres, whichever comes first. It has class-leading 30,000km service intervals, which help to keep running costs down.

The Canter is the only light duty truck in Australia to be fitted with an automatic emergency braking system called Advanced Brake Assist and it is now standard on all new models except for the off-road Canter 4x4. Also standard on the 4x2 Canter is Lane Departure Warning and Electronic Stability Control.